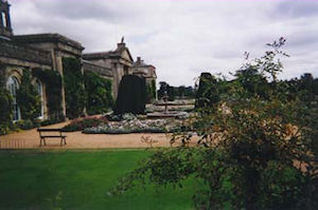 Bowood
The English aristocrats inveigled in the amours and intrigues of our favorite Regency historical romances would have surely concurred that while the country estate with its rolling parks and sculpted gardens was the place to lavish vast amounts of money, time, and expertise, the London townhouse, by contrast, was a much more understated affair.

Most of the Quality did not live in London year-round; it was only a favorite stop on the annual whirl that finished out a cozy winter at the ancestral pile, came to Town for the spring social Season, proceeded to the beach for the summer, and went visiting other people's country houses in the autumn for the grand sporting season, from August grouse-shooting to the November fox-hunts.

Since London then, as today, was an outrageously expensive place to live even for the lower peerage and upper middle class, like the people portrayed in Jane Austen's novels, it was very common simply to rent a townhouse for the period of time one needed it. The rented house was furnished and came with a basic household staff.

By contrast, most of the upper nobility (dukes, marquesses, and earls) and those with political careers who had to be in Town more frequently to attend Parliamentary sessions, did in fact own their townhouses and kept them running year-round.

A few great noble families lived in huge city mansions like Spencer House, Apsley House, Holland House, and Buckingham Palace (previously known as Buckingham House before the royals traded properties with the Duke of Buckingham), as well as the extant Burlington and Devonshire Houses; but such palaces were indeed the exception, most belonging to an earlier, more formal period. One rare case of a true palace built in the heart of London during the Regency was the Regent's own Carlton House by Nash. (With its Italianate colonnade down Pall Mall, many people found it hideous when it was finally finished, at great expense to the nation.) In general, however, the aristocracy was engaged in building or renovating beautiful, sprawling estates out in the countryside rather than building great mansions in Town, as their ancestors had. In London, they were content to make do with elegant, efficient townhouses.

Web Tour: Spencer House - Example of a London mansion - Go have a look, but come right back to read on! http://www.spencerhouse.co.uk/

Exterior of the Town House 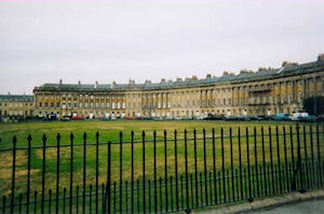 Terrace Houses on the Royal Crescent - Bath
The first thing to know is that when we use the term "townhouse" we are most often talking about row-houses. A block of row-houses was referred to as a "terrace." When a very upscale terrace was curved in a half moon shape, it was usually called a crescent. An interesting point about Regency terraces is that they represent one of the first forms of what is so common in American suburbs today-the planned community.

Like modern townhouses, each unit in a terrace is an independent residence, but shares a support wall with the unit on either side of it; thus, there can only be windows in front and back. Terraces could be constructed in straight lines along a street, or, for the rich, formed into a gentle crescent.

Always long and narrow in design, usually with a flat roof, row-houses solved the problem of making maximal use of space in a crowded city. They also offered a simple, standard design that could be built large, small, or medium-sized, depending on what market niche the builder wished to sell to-how much money the future residents wished to spend.

Three or four stories with two rooms on each floor was fairly standard. (This does not count the kitchen, which was situated on the ground floor and semi-detached at the back of the house to avoid fire hazards.)

Later, the Victorians commonly slapped on a fourth story atop their Regency-built townhouses to accommodate their larger domestic staffs, and to make sure that the maids' top-floor sleeping quarters were located as far away as possible from the handsome young footmen's quarters in the basement! (You have heard that footmen were notoriously chosen for their looks, right?) But I digress...
First Floor

And so, we have finally arrived at the fanciest floor in the house, with the tall windows. We've come up a flight of stairs, true, but don't call it the second floor. In England, this is referred to as the first floor. You've probably read scenes in historical romances where "they went down to dinner." Here is why. For dinner parties, the arriving guests would be shown up to the drawing room until everyone had arrived, and then, when dinner was served, they would "go down" to dinner in the dining room, which we already looked at below.

In contrast to the ground floor, the first floor has a lighter, more feminine tone. The decor is more likely to be in light hues with silk wall-hangings. Though many have beautiful hardwood floors with intricate parquet borders, wall-to-wall carpet was not uncommon for Regency drawing rooms. On the first floor, the front room was almost always the drawing room; the back room could be a second drawing room, salon, or a formal music room. It was quite common to have folding doors between the two rooms that could be opened up to create one large space for entertaining.

As mentioned earlier, the first floor had the tallest ceilings, often painted with garlands, medallions, or other light, airy designs, and usually boasted impressive chandeliers. Light was an important feature, so drawing rooms tended to have plenty of mirrors. The first floor also had the tallest windows, which, rather than running flat against the wall, were set back in window alcoves about a foot deep. This allowed space to fold back the delicate interior shutters or "Venetian blinds" that were as popular then as they are today. (Modern manufacturers often call them "plantation shutters.")

I would think that two people at the most could stand on one of those balconies at the same time-they're tiny, more for enjoying the view rather than the way we'd use a modern outdoor deck.

Time for another stop on our Web Tour: This time, the destination is Prinny's own townhouse in Bath, the glorious end unit,
#1 Royal Crescent. Their website offers you a mini-tour at this link:
http://www.bath-preservation-trust.org.uk/museums/no1/tour.html

The second floor featured the best bedchambers in the townhouse. These rooms are out of the public eye, so while they were still highly comfortable and attractive, there is not the level of conspicuous consumption apparent in the drawing and dining rooms. The ceilings are the same height as the ground floor or lower; nice but simple fireplaces; plain hardwood floors with area rugs, or wall to wall carpet. Wallpaper or fabric wall hangings were popular for bedrooms.

It was not uncommon for man and wife to have separate bedrooms, often connected by a dressing room. Sometimes the lady also had a "boudoir" or sitting room adjoining her bedchamber, which functioned as her office. Here she could meet with her top servants to give instructions, work out her social calendar with her secretary, answer her correspondence, or receive informal visits from her closest female friends or family members. Finally, if the townhouse were built in the later part of the Regency and could boast a flushable indoor water closet, it would likely be located on this floor.

The third and topmost floor of the Regency townhouse held bedrooms for junior family members and/or top-ranking servants like the housekeeper, cook, or governess. If there were young children in the family, the nursery would also be located here, with adjoining accommodations for the nurse and her helper, the nursery maid.

Well, now you've seen the Regency townhouse from outside to inside and bottom to top, and having come so far you deserve a grand reward. I can now reveal that I've saved the best till last, like any crafty novelist. *grin* In fact, I found the mother-lode of all websites for our purposes, and I will now send you to the links below. You are going to have a field day with this.

Locationworks is a company that helps moviemakers find the right locations for their movies. They have a treasure trove of Georgian-era townhouses that is richly worth perusing. Have fun. Come back when you can drag yourself away. But first...

In closing, the townhouse model worked so well for Londoners that building proliferated, with the result that by the Victorian era, people were complaining that the city had become a soulless maze of drab, endless monotony. Worse, the neat pale stucco of Regency townhouses had turned gray and depressingly dingy by mid-century as the Industrial Revolution spawned innumerable smokestacks atop factories and steam trains, puffing out black clouds of pollution. The gleaming neoclassical Regency had already begun to fade into the fog of Victorian coal-dust.