E.G. FOLEY
In between romance novels, it is my great joy to co-write fantasy adventure novels for kids (and kid-at-heart adults!) with my husband, Eric, a former middle school teacher under the pen name E.G. Foley. These "Middle Grade" books are whimsical, rollicking, action-packed adventures full of humor and imagination. They appeal to both boys and girls from age about 9 to adults. They're great for fans of magical/fantasy series like Harry Potter, Rick Riordan's Percy Jackson series, or Brandon Mull's Fablehaven books. Available in e-book, trade paperback, and audio book formats. Check 'em out!

NEW! ~ You can order Autographed Hardcover or Paperback copies from our new E.G. Foley Store here. Makes a great gift! 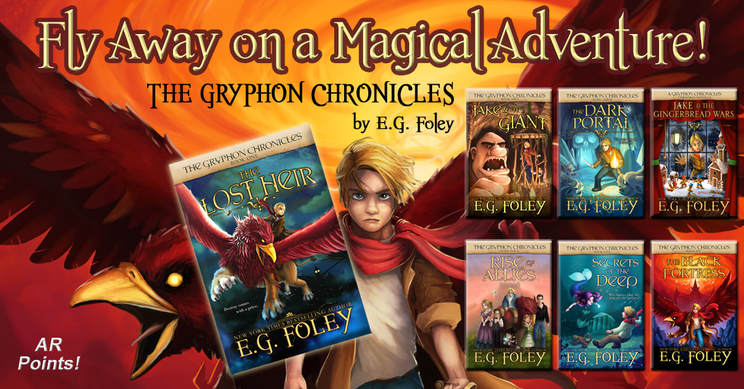 Victorian-set Fantasy Adventures
​with a hint of Steampunk ~ Rated PG
For Ages 10 and Up!

Now Accepted in the AR (Advanced Reader) Program in schools across the U.S.
Kids can earn AR reading points!

E.G. FOLEY is the pen name for a husband-and-wife writing team who live in Pennsylvania. They've been finishing each other’s sentences since they were teens, so it was only a matter of time till they were writing together, too.

Like his kid readers, “E” (Eric) can't sit still for too long! A bit of a renaissance man, he’s picked up hobbies from kenpo to carpentry to classical guitar over the years, and holds multiple degrees in math, science, and education. He treated patients as a chiropractor for nearly a decade, then switched careers to venture into the wild-and-woolly world of teaching middle school, where he was often voted favorite teacher. His students helped inspire him to start dreaming up great stories for kids, until he recently switched gears again and left teaching to become a full-time writer and author entrepreneur.

By contrast, “G” (Gael, aka Gaelen Foley) has had one dream all her life and has pursued it with maniacal intensity since the age of seventeen: writing fiction! After earning her Lit degree at SUNY Fredonia, she waited tables at night for nearly six years as a “starving artist” to keep her days free for honing her craft, until she finally got The Call in 1997. Today, with millions of her twenty-plus romances from Ballantine and HarperCollins sold in many languages worldwide, she’s been hitting bestseller lists regularly since 2001. Although she loves all her readers, young and old, she admits there’s just something magical about writing for children.
WWW.EGFOLEY.COM